Richard Turner tells us how to buy good meat

Richard Turner is the busiest and most unassuming chef in Britain.Â His list of projects is dizzying; from Hawksmoor to Foxlow and Pitt Cue and beyond, heâ€™s also one half of butcher Turner & George, plus he’s the man who brought Meatopia to the UK, Spain – and the list of countries keeps growing. Oh, and he released his latest book, â€˜Hogâ€™ in April, plus thereâ€™s a follow up on the way. I could go on. But besides all that, heâ€™s also one of the nicest people Iâ€™ve ever met.

I went to a BBQ masterclass at the Electric a while back, in which Richard gave us some golden rules to follow if we wanted to grill like heroes. All the trade secrets aside, the crux of it really is theÂ BBQ itself and the fuel. Butane-powered, electric, gas, etc – none of this count as actual BBQing, and to get the best flavour, you must cook over logs or charcoal. We also got aÂ primer on brining, rubs as an alternative to seasoning, plus a quick guide on where to buy the best meat. He also shared his jerk chicken seasoning recipe, which is FIRETASTIC, and so good it made several of the men in the room weep with joy. View it in full here.

As youâ€™d expect from someone who supplies and sources some of the best meat in the country, when we got to the ‘buying your meat’ bit, he spoke with honest passion that really stuck. I sat down with him yesterday to talk about this in more detail, over bacon naan at Dishoom.

We started with Hawksmoor/Turner & George, and the selection process there. â€œWe visit farms and suppliers and do repeated tastings, usually we hear about people via the press but we are also judges on the YBF panel. I’ll start the process perhaps but ultimately it will be a group decision.”

This year Richard again judged the Meat category at The Young British Foodie Awards, and has already snapped up Billy Franks beef ham, which he won the 2015 prize for and is yet to go to market – proving that awards such as these are one of the best ways to surface fresh young talent. He also applauded runners up Emily & Lucy McVeighÂ fromÂ Kenton Hall Estate, who have done such great work on their rare English Longhorn BeefÂ herd, particularly around welfare. More in the video below.

I think the thing most people want to ask those in the know is where they get their own meat from. I asked Richard who his favourite producer was, and he pointed to a small herd of Shorthorns in devon that he says is the best beef heâ€™s ever tasted; â€œI won’t divulge who is farming them as it really is a very small herd indeed and I want themâ€. Such a tease.

The issue of quantity is a significant one though. With six sites for Hawksmoor in the UK now, Richard says that having enough meat to bring real consistency from restaurant to restaurant is a problem. â€œI donâ€™t think it matters if you sit down and one macaroni cheese is browned more than the other, but when it comes to the quality of your steak â€“ thatâ€™s a must. Even if you canâ€™t buy the same cut everywhere at the same time, the standard has to be the sameâ€.

Meatopia, which took place for the third time in the UK just last week, was started ten years ago by the late Josh Ozersky in New York. Created as a â€˜call to arms for judicious lovers of meatâ€™ and â€˜a clarion toot to the perfectionists amongst you who demand the best in taste and provenanceâ€™, the chefs and butchers taking part deliver a â€˜real fireâ€™ promise, with the best ethically-sourced meat, nose to tail treats, artisan beverages and live entertainment. 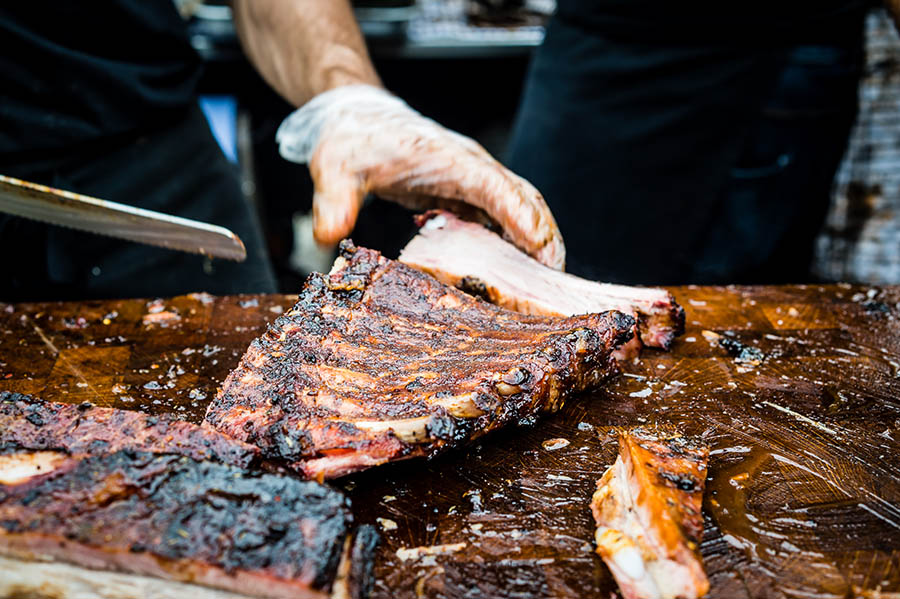 â€œIn 2012 it came to our attention and we set about putting the event on in London for the first timeÂ in 2013.Â What was intended as a great BBQ for friends and industry people with live music, DJ’s and drinks turned into an event with 4,000 people turning up and us running out of beer and food. In 2014 we set about making it a more professional event and managed to feed, water and entertain 5,000 people successfully.â€

This year the event sold out over a month early, with 6,000 people coming over two days to eat meat cooked by 40 different chefs from around the world.

In terms of practical magic; the bottom line must be about how to recapture this at home. So where does Richard Turner buy from? â€œI get my meat delivered from my own butchers, Turner & George, I buy my vegetables from Tesco and everything else from Waitrose.â€

Boom. As simple as that. I have to put a second vote in for Tesco here; their veggies really are the best of all the supermarkets. Just not the tomatoes; we had a long discussion about tomatoes and the book ‘The Dorito Effect‘, lamenting the loss of real flavour due to the fact thatÂ palates have been raised to expect modified versions of fruit & vegetable. More on that another time. 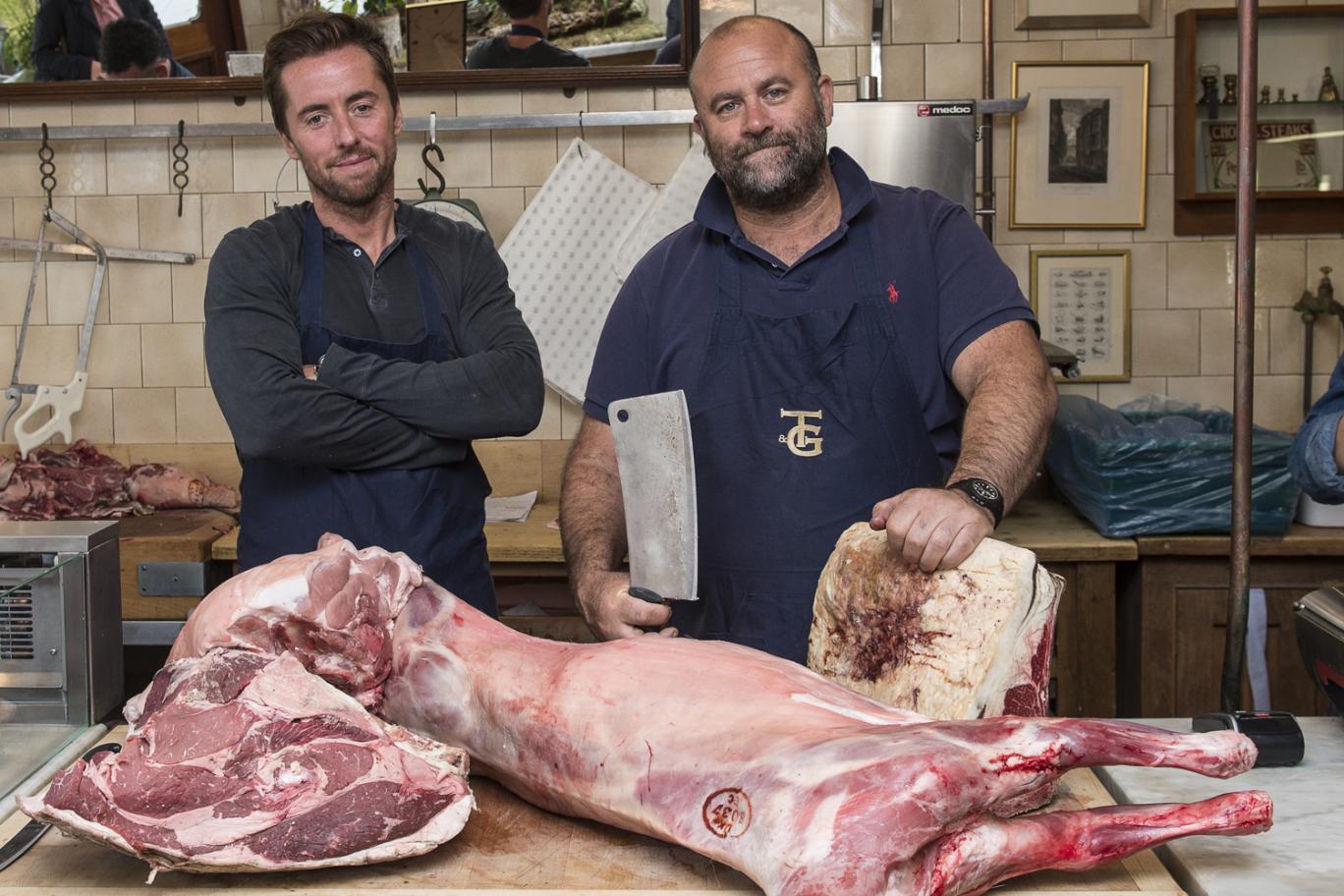 Turner & George deliver to the whole of the UK, but in place of that, Richardâ€™s advice on buying meat at home is â€œdefinitely not a supermarketâ€. He says we should visit local butchers and askÂ questionsÂ about the meat; where itâ€™s from, what breed, how it was reared. â€œIf thoseÂ questionsÂ are answered satisfactorily then that’s where I would buy my meatâ€.

A final word on purchasing. I asked which three bits of advice he would give to people when selecting their meat. â€œBuy from people that can talk about the meat, askÂ questionsÂ and learn where it’s from and why thatâ€™s important, buy less meat but better quality. In fact, eat less but higher quality meat.â€

There’s LOADS more exciting stuff from Richard in the pipeline, but for now, you’ll just have to wait and see 🙂

Turner & George pic via The Standard