Ok. So, I’ll settle with you. I’m a skeptic of the ‘raw’ movement. Not for its health benefits of course, but for the TASTE.

We’ve got a raw food restaurant just next to us in Notting Hill, and they’re super lovely (I once locked myself out of my house with no battery, and they found me a charger plus some peppermint tea). However, every time I walk past, even though the food is presented *beautifully*, I always raise an eyebrow at dishes cooked no higher than 42 degrees. I think I’d rather just eat a salad.

I should probably just go in there and try it, rather than speculating, but ANYWAY.

Credit goes to my Mum for this one; she heard Raw Chocolate Company founder Linus Gorpe on Radio 4, waxing lyrical about his passion for raw cacao, and urged me to give it a go. She even went and bought this snack pack of raisins for me because she was keen to try them too. 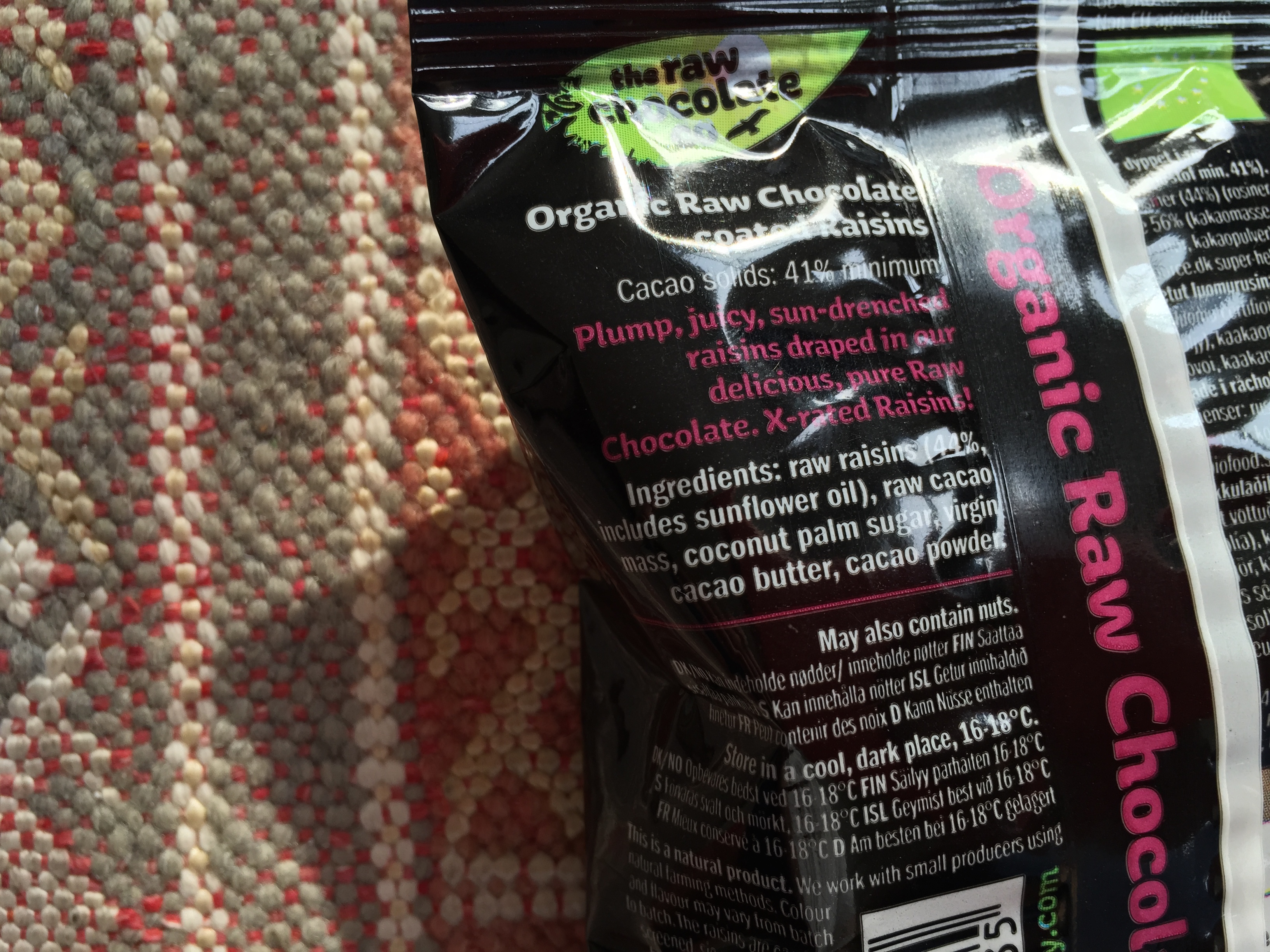 They look a little, bizarre, sure. But actually, they taste amazing. The raisins are dipped in raw chocolate, then liberally dusted with cocoa powder. They’re dark, but not bitter, and really delicious.

The Peruvian cacao Raw Chocolate Compnay use has been sun dried and not heat treated, as well as minimally processed to keep it as close to the natural state hanging off the tree. They start from scratch, making chocolate in the traditional way from cacao beans and cacao butter, plus something to add sweetness, like coconut sugar, lucuma or xylitol. Then they grind the ingredients for a very, very long time, to make it super velvety smooth and intense.

You get all the same benefits of ‘raw’ with this chocolate; no heat means no killing off the enzymes that aid digestion, raw foods contain friendly bacteria & other micro-organisms that stimulate the immune system, and it has higher nutrient values than most cooked foods. There’s 128 calories in each 28g bag, which isn’t too bad when you consider the nutritional make-up.

Founded in early 2006, the company began with Linus experimenting in his kitchen. Now, many trials later, the Raw Chocolate Company is ten people strong and expanding. Not only is it Fair Trade, but also Soil Association certified as Organic, as well as Vegan and Vegetarian.

As you’d imagine, these are quite pricey (£1.49 per snack pack or 12 for £16.49), however – if you’re after a mid afternoon pick me up that’s FAR better for you than a cupcake, these are for you. Plus there’s SO much more in the Raw Chocolate range to try out, check it out here.