At the weekend, I had some rather good cider. Continuing my quest to try as many of the 3 star winners of the Great Taste Awards as possible, I’d contacted Apple County Cider Co, and they were kind enough to send me a bottle of their award-winning Vilberie Medium Dry.

I don’t drink cider very often; but when I do, I like something crisp and clean. The Rekorderlig ones are ok if it’s scorching, but they’re so sugary that you can only drink one. I’m quite partial to Aspall because it’s quite dry, but it tends to taste a bit mass-produced if it’s not utterly ice cold, and when it is, you can’t really taste very much of anything. And while I used to love Old Rosie, it’s more of a scrumpy-style, flatter cider, with cloudiness to match.

Apple County Cider Co (whose tagline is ‘Deciderly Good’, grin) is the creation of the award winning cider producer Ben Culpin, named so “to put Monmouthshire back on the map as one of the top apple counties producing the finest cider”. Based at Whitehouse Farm, near Skenfrith in Monmouthshire, Ben has been producing cider for over six years during which time he has won numerous awards including Great Taste and the Welsh Cider and Perry Championships.

While the company’s Dabinett Medium also won 2 star at the Great Taste Awards, I had the Vilberie Medium Dry, which picked up 3 stars and made it into the ‘Top 50 winners’ list, as well as picking up Silver at the International Cider Challenge 2015

It’s a lightly sparkling single variety cider, made with 100% juice from Vilberie bittersweet cider apples. This “grown up” cider’s carbonation and the level of tannins drew praise from the Great Taste judges, who also enjoyed the balance of sweet and dry and its “clean, crisp and refreshing taste”.

It’s an absolutely lovely drink; sparkling enough to be refreshing, but not overpoweringly so. I totally agree with the ‘grown up’ comment. It’s a really tasty cider; and even though I could most definitely see myself drinking it for an afternoon in the sun, since it’s not cloying or too strong, I also think you could cook really well with it. We make a baked ham every year from Christmas that you need to soak in cider first; and I think I’d be using the Vilberie this time round!

You can go and visit Apple County in person; where the farm grows cider apples and blackcurrants in fields looking across the stunning landscape of the Monnow Valley. Alongside the Vilberie apples, they also grow Dabinett, Michelin, Brown Snout, Yarlington Mill and others. These apples are harvested, washed and pressed onsite in late Autumn, then the juice sits in the barn and enjoys a long cold fermentation throughout the winter. In the spring the vats are ‘racked off’ for a secondary fermentation, and the cider is ready to enjoy from early summer.

Plus, they sell homemade jams, cordials, local ales, honey & ice creams, and to celebrate National Apple Day they host their own event close to the 21st October each year. They set up a vintage cider press at the Village Hall and invite everyone to bring their apples & pears to put through it themselves, which is a tonne of fun. 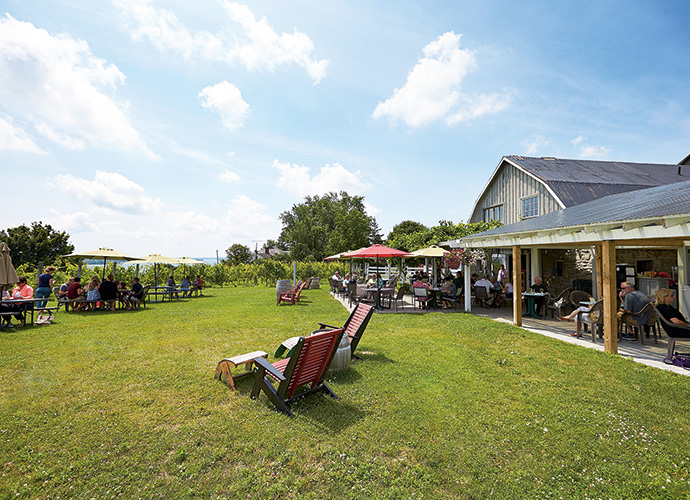 You can order the Vilberie and the Dabinett ciders online via their website, using PayPal, and your cider will be delivered in shrink wrapped cases in 3-5 working days. £44 for a case of 12 individual bottles, or £27 for 6, £45 for a 10 litre box, £70 for 20 litres.