I invested in Alex Hely-Hutchinson’s bid to fund a fixed location for her pop-up porridge phenomenon 26Grains in Neal’s Yard a few months back. It ticks off two ofÂ London’s biggest food trends at the moment; a focused, single item menu and â€˜new waveâ€™ healthy, so I knew it would be popular.

Inspired by living in Copenhagen for a year, founder Alex observed the wonderful way the Danes “embrace all the different types of grain for their tastes and textures, and how that can become a beautiful bowl of porridgeâ€. Given that her Mumâ€™s signature dish is porridge (not to mention one of the nation’s favourites), itâ€™s no wonder she chose to turn that into a business of her own. As someone who also gets their passion for food from their Mum, I totally understand that.

So, powered by a sense of hygge (a Danish word that has no translation but evokes warmth, cosiness, and togetherness – everything 26Grains believes a bowl of porridge to be), Alex set about selling grain-based treats at pop ups across London. They were wildly popular, and 184 backersÂ pledgedÂ Â£16,850Â via Kickstarter back in July.

Since then they’ve confirmed their residency atÂ 2 Nealâ€™s Yard, and last month they revealed a new autumnal menu; packed full of traditional-with-a-twist sweet porridge bowls, alongside savoury offerings for lunch made from brown rice and such, a bircher muesli and smoothie bowl. 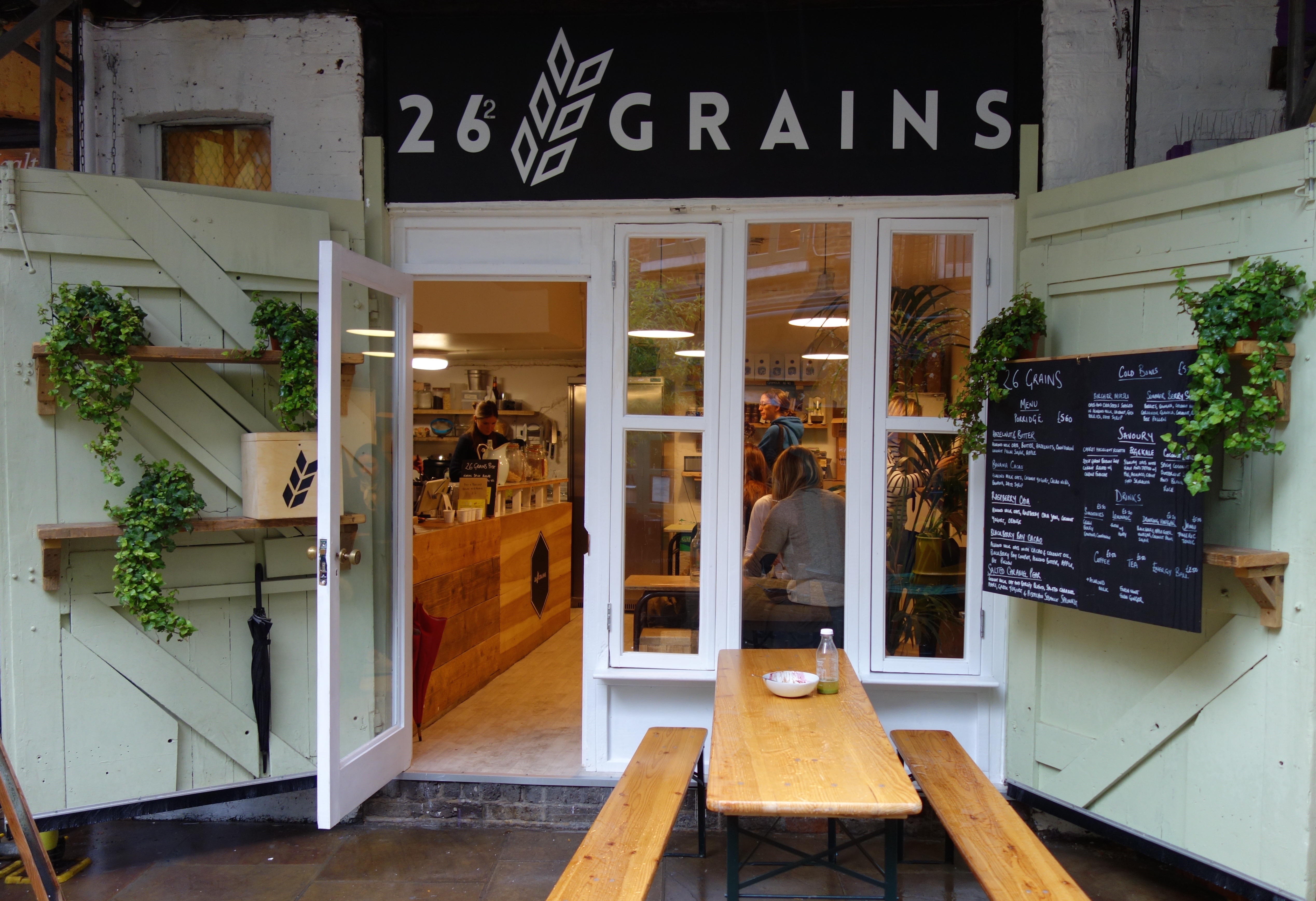 Unlike the ever-so-unfulfilling offering at Cereal Killer Cafe, 26Grains bowls are served with almond milk porridge (bar the Salted Caramel Pear option, which comes with coconut milk)Â and a mound of various toppings packed with goodness. For just Â£5.60 per portion, you’re getting a decent whack of nutritious substance.

We ordered their classic Hazelnut and Butter bowl, which is served with cinnamon, coconut palm sugar and apple. It was a little over-buttered for me, but still tasted great. The salt (one of Alex’s top tips for making good porridge) makes a serious difference.

Plus we got the Banana Cacao, served – as you’d imagine – with nibs of cacao, coconut yogurt, and date syrup. This was slightly less sweet, and really was incredible.

On the savoury menu for autumn is black sticky rice and spiced butternut squash, which sounds incredible, plusÂ an egg and kale dish that’s oat-based, served with avocado &Â Srichacha. Then finally, Carrot Hazelnut Risotto, which sounds unusual, but I’d imagine is similar in taste to a pumpkin tortellini with hazelnut butter (which is banging).

On top of this, Alex and the team run events GALORE. From Yoga Breakfasts with Deliciously Ella to Grains Tasting evenings; get down there and try it out – all information here.

Photo of Alex via The Magic Elephant.