AroundÂ this time every year, my Mum asks me two questions. First; can we go away this Christmas? Then shortly after; can we have goose this year?Â I’m a sucker for a proper at-home Christmas, so I’m always a bit anti on the first point, but this year – I’ve decided to cook goose for the very first time.

While the modern day American family will sit down to a mealÂ of turkey, ham or beefÂ this Christmas, goose is still the traditionalÂ Christmas meat of choice for many – and was long before Dickens raved about itÂ being as much aÂ ceremonial event as much as a meal in A Christmas Carol. (NB.Â opportunity to include a Muppets pic, which I am most definitely taking…)

Geese are pretty much perfect for a celebration meal in December. First up – they’re ready to be eaten twice a year; first in the early summer when they’re young, andÂ again when they are at their fattest at the end of the year. So you get the plumpest birds for Christmastime. Also, goose fat has an incredibly low melting point (between 25Â°C and 37Â°C)Â making it easier to cook – and easier to eat. It was for this reason that goose was used as theÂ centrepiece at Michaelmas, a feast day celebrated during the Middle Ages, whichÂ fell on the winter solstice and honoured the end of the harvest and the changeÂ in season. Because of this (and even older Greek traditions involving using goose as an offering to Thor around harvest time)Â it was only natural for gooseÂ to become the roast of choice for the Christmas, which eventually took theÂ place of other winter solstice festivities.

We spoke to Hawksmoor legend Richard Turner about how to select, buy and cook this British classic perfectly.Â Scroll down for his Roast Goose with Stollen Stuffing recipe below; taken from Hawksmoor at Home.

Why pick goose over turkey?

Goose is traditional British Christmas fayre, whereas turkey is anÂ import from our American friends. At Turner & George, we’re very aware ofÂ this, so try and recommend goose for our customers. It also helpsÂ that goose is a rich and succulent meat, and full of delicious fat,Â and fat is good.

How far in advance should you order?

For our online customers, as far in advance as you can, order slotsÂ fill up extremely fast as soon as they open, so the sooner theÂ better. In store though, our customers have until about a weekÂ before Christmas. With all things considered though, we recommend soonerÂ rather than later to avoidÂ disappointment.

Where should you go?

To your local butcher, always. The UK is experiencing a real boom,Â recently, and there are some fantastic producers who will provideÂ customers with naturally reared, slow grown meat. It’s a sure fireÂ way of making sure that your Christmas bird or roast will be of aÂ good quality. Look for birds that have been hung guts in afterÂ slaughter, as this intensifies the flavour much like when you dry-age beef. An animal with a longer life will make much tastierÂ meat.Â Only buy from a supermarket as an absolute last resort.

OurÂ geese are free range, produced on the Yorkshire Wolds. They are reared as naturally as possible and spend most of their life grazing 40 acres of grassland. Every evening they’re fed an ad lib diet of home produced cereals.Â The geese are a Danish Legarth strain, which produces a large but lean bird, and are purchased from a Norfolk breeder as day old goslings to remain on the farm until slaughter. All of the poultry is processed on the farm and is dry plucked and hand finished.

That depends on what you’re buying and from where. In London,Â a very good properly reared goose can push the Â£100 mark.Â Really, if you want the very best Christmas meat available, and ofÂ course you do, you should be looking from around Â£60-80 to feedÂ between 6 and 8.

Here you need to remember that an ethically, properly reared birdÂ with a longer life will be bigger, and while a 5 kilo bird could feedÂ ten people – Iâ€™d suggest buying a large bird regardless of the size ofÂ your family. Luckily, goose is the ultimate meat for leftovers, itÂ keeps for a good amount of time and can be used in myriad ways.

Which stuffing should you use?

It depends on personal taste, but I like a well seasoned pork meatÂ based stuffing with a good fat ratio, using chunks of breadÂ (sourdough works well) and quartered onions for instance.

Any watch outs? Stuff not to do – or things you’d doÂ differently?

Professional chefs often advise cooking goose rare in the FrenchÂ manner, but Iâ€™m not French and a perfect goose for me is cookedÂ long and slow. Well done with soft, almost confit flesh and crispyÂ salty skin. 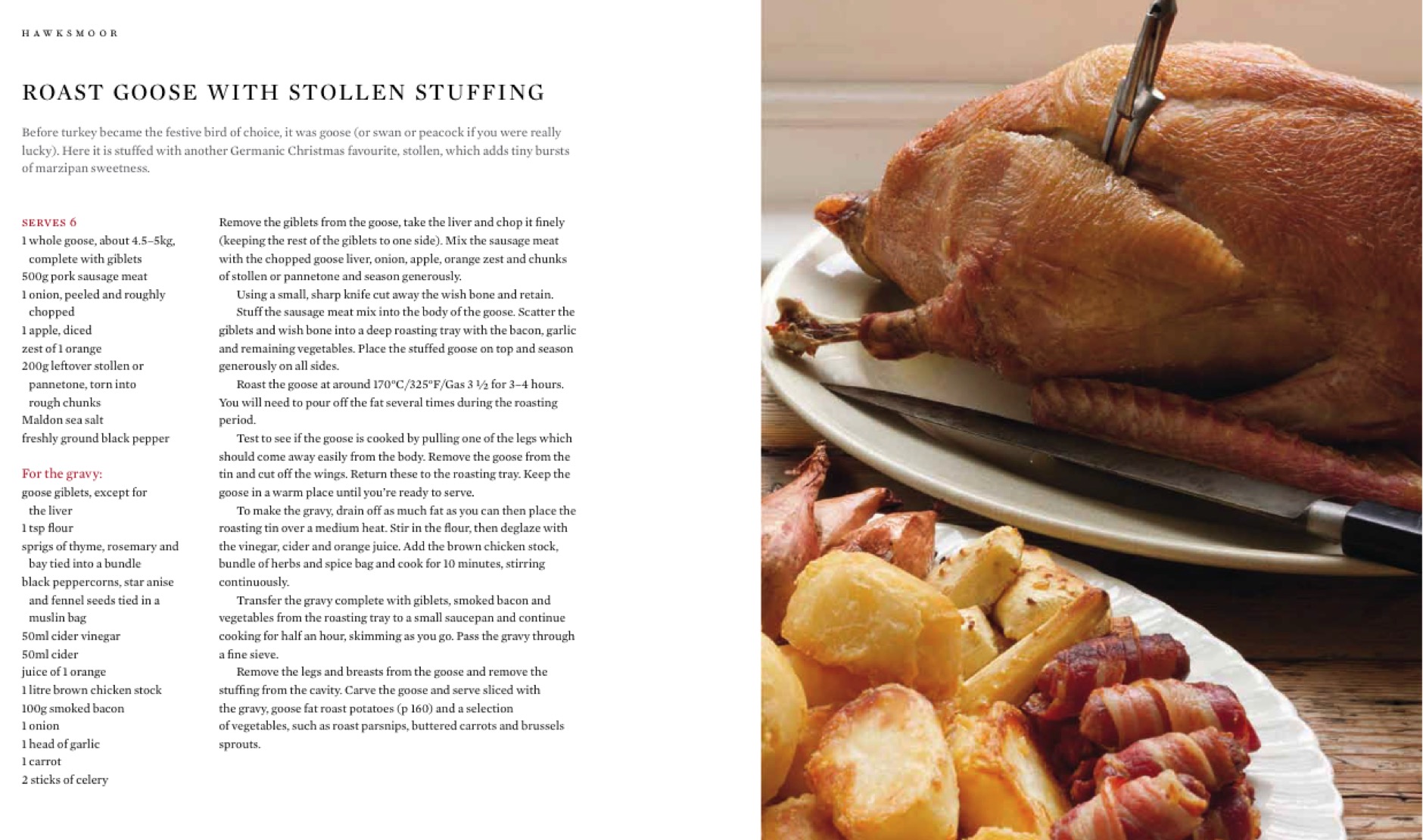