I’ve been messing about with my diet all year. Not because I’m a slave to food fads, but because at Christmas I realised that my energy levels were consistently super low – and that it was most likely to do with the way I was eating.

As such, I gave up meat. By the end of last year, I’d ended up eating it by default rather than really wanting it. So I cut it out, and when I was able to buy well-produced meat from a good butcher, I’d have it then. That had huge impact. But, I’d still face crashes at 4pm (which isn’t necessarily unusual) that I couldn’t seem to account for.

Friends of mine have tried quitting sugar, and suggested it might help. One read of Madeline Shaw’s Get the Glow later, and I was hooked.

One of her recipes is for grain-free chocolate granola, which looks amazing, but I’ve used Davina McCall’s recipe before and was hugely impressed by it. Yesterday I made a few tweaks, and it’s turned out *beautifully*

On a previous attempt, I’d used desiccated coconut, which makes for quite a fine granola and doesn’t produce a very satisfying consistency. This time I went in search for proper curls of coconut, and happily discovered that Daylesford make a raw variety.

Daylesford is probably one of the more famous producers of organic goods; one of their farmshop & cafe locations is just minutes from me in Notting Hill, and it’s *always* packed. They’re also regularly featured in those bundle deals on Ocado, which makes the price of their soups and sauces a little more palatable, and stocked in Selfridges Food Hall.

When they don’t make a product on their farm in Gloucestershire (like this, since the wild coconuts come from Sri Lanka in the Philippines), they source from artisan suppliers who share a commitment to quality and sustainability, and who produce items to their recipes. As I understand it, the husks & shells are removed, then the coconut meat is washed, shredded and slowly dehydrated at a low temperature.

The resulting coconut flakes are more flavourful than standard desiccated coconut – which is usually washed in chlorinated water to sterilize the coconuts once they are opened and peeled, then pressed to remove moisture and dried in huge conveyer ovens at high temperatures. This is simply because the flavours have not been vented off by high temperatures and no moisture has been pressed out prior to drying.

To see these babies really shine, I used the recipe below, which with a few tweaks make the best granola I’ve ever eaten – all with no added sugar. 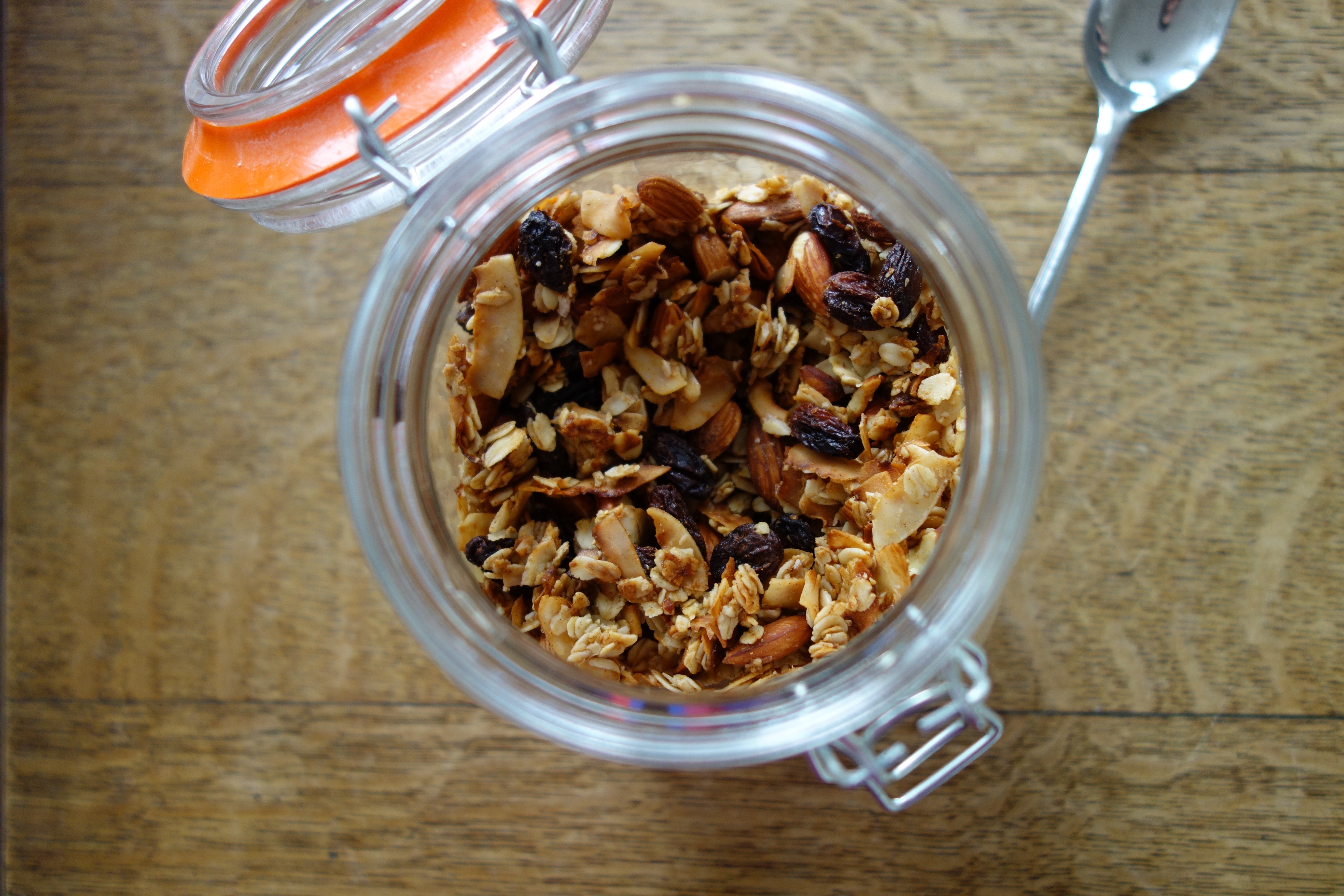 2. Put the oats, coconut, nuts and salt in a large bowl. Warm the oil to liquify, then add to the dry ingredients alongside the maple syrup

3. Mix in the cinnamon and sultanas

4. Whisk the egg white until it’s frothy. Pour this over the mixture and mix thoroughly again. Spread the granola over the baking tray as evenly as you can

5. Bake the granola for 20 minutes, then turn with a slotted spatula. Cook for another 10 minutes and turn again. Mine then took a further 5 minutes, but this last bit of cooking time is really ‘to taste’. Bake for longer if you want a more golden granola

Then simply leave to cool and store in an airtight container. It’ll be at its best for a month